She had almost given up hope of becoming an artist. Today she is glad that she didn’t give up. Icakuriren goes into the woods with Helen Sjöholm and talks crying, candy and a longing for silence.

This is my office, Helen Sjöholm says and gazes out over the water and forests.
We are in Nacka nature reserve outside Stockholm. It’s a scenic area that with its hiking trails makes a popular destination for forest mullets, the sporty types and schoolchildren. A busload of preschool children have just arrived and at the place are already a bunch of high school students orientating. At the park bench it smells of grilled hot dogs, plastic wrapped sandwiches and teenage sweat. Here, amidst all the athletes and youths, singer and actor Helen Sjöholm has her office. Or well… office and office, the case is rather that she walks or runs around the lake and crams her head with lyrics for her performances.
– I’m walking and talking aloud to myself, blah blah blah, and all of a sudden come across someone who wonders what you are doing, what kind of drama there is in the woods… ooops! she says and makes a surprised face.
Helen Sjöholm had her breakthrough with 20-year jubilee Kristina från Duvemåla, where she played the title role. Since then there has been more musicals, revues and also film. In addition she holds a record of the Swedish Charts with the song “Du är min man” which was on the list for 278 weeks. That she would choose a career as a singer, however, was anything but self-evident from the beginning:
– I had a safe and wonderful upbringing in every way, but I don’t come from a family of musicians. My family comes from two types of directions: a peasant family and a city family. Both my grandmothers got to experience a historical change: from simply being able to work one could now suddenly get an education. ”Get a good education!” they said.

Sang in a choir
The choice fell on Social Science with a focus on language and history. But Helen Sjöholm could not let go of the thought of music, and during both childhood and adolescence she sang in choirs, held concerts, went on choir trips and performed in different places of her childhood town Sundsvall.
– It was a good town to grow up in as musically interested, because at that time a lot of televison and radio was made here that you could participate in. I did my first live concert when I was 17, she says and gets something nostalgic in her gaze.
– However, it’s a big step between living with the music to living on it. I wanted to sing and meet the audience, but to do it full time… it wasn’t a possibility until quite late. I thought it felt unreal – until Kristina.
With “Kristina” she of course means the musical Kristina från Duvemåla. Helen Sjöholm was only 25 years old when she was casted to Björn Ulvaeus and Benny Andersson’s play. By then she had tried several times to get into the school of drama, but hadn’t managed. Instead she began Cultural Studies at the University of Stockholm, but “it didn’t feel one hundred percent”.
– Kristina became conclusive on many levels. I couldn’t get a better chance. It was my education. I’m still learning things, but those five years with the show were monumental, she says with emphasis in her voice.
Five years, as it was, well… a dizzying long time when you’re twenty-something. Helen Sjöholm stood on the stage of Malmö Opera six nights a week. Life revolved around work, work, work.
– On Mondays, which was our day off, I ate candy and cried on my couch. I was so tired. And so absorbed. There were such strong emotions to convey in the performance. I died a little bit every night, at a quarter to eleven, when Kristina died. It was a total exhaustion. At the same time the women in my family, my grandmothers, were getting old and decrepit, and it touched me strongly too. Shortly after they passed away.
When you are 25, life is usually about hanging out with friends, travelling, partying, and doing spontaneous things. Didn’t you ever feel that you missed something?
– Yes, I could feel that. I was booked every weekend and lost touch with friends. As soon as I was off, I got ill. But I won so much during this time too. I found myself and dared to feel grounded in that. Sure, I lost the freedom to travel and catch on friends’ sudden whims, but my big adventure consisted of what I got to do in my job. I was also in a relationship where there were two children from before and family life also attached me.
We have sat down inside a small diner, which with its sloping roof and thick planks on the wall reminds of a chalet. A few tables away from us a dad sits and tries to coax his little son to eat a sandwich and a Festis. Otherwise we are all alone in the café. The only sound heard is the hum of the refrigerated cabinets, where some neatly lined up prawn sandwiches are waiting to land in someones stomach.

”I need to have a project”
If 25-year-old Helen Sjöholm used to unwind with candy and crying on the couch, the method is of an entirely different kind today:
– I’m that person who relaxes by becoming more active. I need to have a project, so I start a big clean up or go out and run. And then we have three children, the twins are three years old so it’s full speed all the time. It’s great to have two who are in the same phase, something new happens every week and it’s great to wake up and discover that there are two people sitting outside the bedroom door playing with a car track, Helen Sjöholm says and squints against the sun rays shining through the window.
– I work quite a lot now too, it suits me fine, although I’m often tired and sometimes feel inadequate. But so does everyone. My husband David is a sound engineer and we need to find an outlet for job-related things to also be able to be good parents. We have a studio in the basement and work at home, so during the holiday we try to be free five to six weeks at a time, go away and rent a house. Since the job is in the walls a bit, it’s nice to get away and completely let it go for a while.

Wants everyone to feel good
Helen Sjöholm is a person that you want to end up next to at a dinner party. She easily talks to all kinds of people, quickly absorbs moods and is keen that everyone around her feel good. It’s a feature many would envy, but it also has a prize. To constantly be open to others’ emotions also steal from your time. And energy.
– I’m probably a lonely ride, really. Essentially an individualist. I have a great need to be by myself and right now I’m a little overfilled and have to breathe. I try to rest during the trip to work and after the show I go up in the dressing room and close the door instead of chat with the others. Silence is what I long for, because I have plenty of the other thing.

Do you know that there is an established name for that? Thus, to be one of those people who can easily feel the feelings of others and become heavily influenced by moods? It’s called HSP.
– What does it stand for? Helen Sjöholm Personality? she says and laughs out loud.
Yes, it might have been standing for that. But so far it stands for High Sensitive Person. Helen Sjöholm says she was able to channel the sad element in songs already as a child. When she sang them she found an outlet for her darker emotions.
– I have always had a melancholic, slightly pondering and pensive mind. Sometimes that’s a bit heavy, but there is still a strength in it. If you don’t dare to be in the difficult emotions, you don’t experience the big positive emotions either. Sometimes we are a little too afraid of the big drama, she says.

Blended new and old musical
During the summer the singer has been on tour in Sweden and performed with a selection of her songs. In autumn awaits the show I Love Musicals in which she and her friend Peter Jöback will perform some of today’s most popular musical gems from, among others, Evita and Sweeney Todd. After that a new tour with pianist Anders Widmark is waiting.
– I always think it will end tomorrow, but it has moved on and I get new, fun inquiries. I pinch my arm now and then and try to be grateful for a moment every day.
At the same time she admits that it’s not entirely unproblematic to age in an industry that constantly strives for youthfulness.
– I’m moving into a new phase as a woman. Many roles in musical theater are often written for young people. I’ve always been the young one because I’ve worked with people who’s been older than me. Suddenly I belong to a new generation, and it’s fascinating. I’m not afraid of aging, but it will probably be other roles and not as much work, she says without the slightest tinge of resignation in her voice.

They played a big part
During our talk return Helen Sjöholm often returns to her grandmothers. It’s clear that they’ve played a big part in her life.
– I hung out a lot with them and they were inspiring and have created a sense of self-esteem in me. They showed me that most things you can do yourself. Today, when I do things with my children or just feel a special scent I can come to think of them. Stubbornly they passed their living on, she says.

If they can look down on you from their clouds in the sky, what do you think they think then?
– I would have gotten long lists of things they thought I should do, but above all they had been happy that I have a family. They had also felt some pride in my job. “But don’t think you’re something special because you stand there and sing!”, Helen Sjöholm imitates in Sundvall idiom, and continues:
– My maternal grandma had also said that I could mow the lawn more frequently, so that it looks good in front of the house. And my paternal grandma would have said: “Put on something nice also when you go grocery shopping. Get it together!” 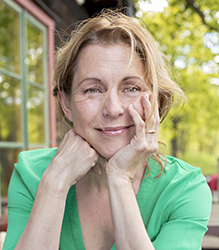 Profession: Artist.
Age: 45 years.
Lives: House in Sickla, outside Stockholm. Originally from Sundsvall, where she was awarded an honorary doctorate at Mid University in 2012.
Family: Husband David Granditsky and children Ruben, 7, Samuel and Johanna, 3.
Current: Has been on a solo tour in Sweden in the summer and fronts the show I Love Musicals together with Peter Jöback. The show will premiere on September 26 at Malmö Arena.