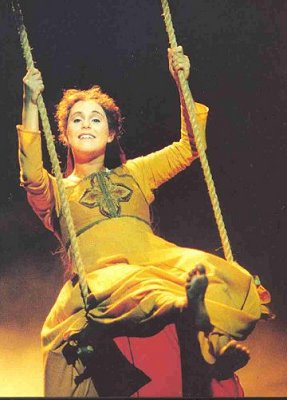 Between 1995 and 1999 Helen brought Kristina, the main character in Björn & Bennys production Kristina från Duvemåla, to life. Directed by Lars Rudolfsson the show premiered on october 7th 1995 at Malmö Musikteater.

Karl-Oskar, Kristinas husband, was played by Anders Ekborg and Robert, the brother of Karl-Oskar, was played by Peter Jöback. Ulrika was played by Åsa Bergh and Fina-Kajsa by Marianne Mörck. The whole ensemble was praised for their interpretations. Helens dramatic reconciliation with God in “Du måste finnas” touched the audiences in both Sweden and abroad.

The production with its beautiful and melancholic music ran for 671 performances in Malmö, Gothenburg and Stockholm and was seen by 1 000 917 people.

“Kristina från Duvemåla” is a grand production and a breakthrough for Helen Sjöholm, playing the captivatingly singing Kristina” the critic at Aftonbladet wrote, the review continued “Benny Andersson and Björn Ulveaus reveals new aspects of their talent both musically but also with their lyrics. Who would have thought them to be reconciling with God? The faith in God is dealt with in the magnificent ballad “Du måste finnas”. Helen sings desperately of faith against all odds. Kristina is far way from home, dealing with the death of her child, miscarriage, illness and isolation. Can se dare to put her faith in God, one last time?”

DN praised; “Helen gives a portrait that must be among the most extensive in swedish musical theatre, allowing her whole being to thrive.” 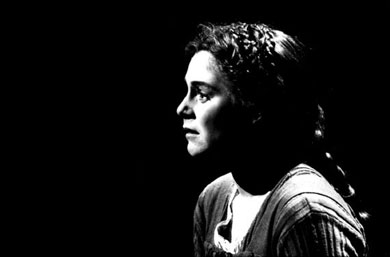 Expressen concluded that Kristina was “a veritable dynamo, explosive as an american steam locomotive and a flaming queen of the prairie” Accordion to Sydsvenskan Helen was “a fantastic Kristina” and Danska Berlingske Tidene called the production a success.

“A delightful voice and a dramatic edge, every time she sings a vocally beautiful experience occur.” Tony Kaplan wrote in Arbetet. Olle Berggren was equally exited “Her voice is as crystal clear as the brook back home in Duvemåla”.

Magnus Haglund, reviewing the production in GP, found the singing overall impressive and Helen, playing Kristina, to be the star of the production. “She makes the tunes flourish, flowing into the musical sphere and she sings with intensity without appearing strained at all. Magnus continues; The grand moment is the reconciliation with God at the end of the second act in Du måste finnas, here the powers are set loose, the anxiety and the enchantment, the doubt and desire.

In the autumn of 1996 the soloists travelled to Minnesota, USA, to give a concert version of the musical. They also did a tour in eight swedish cities in the summer of 2001. The tour started in Växjö on june 6th. These concerts were sold out to the last seat.

The CD that was released in october 1996 was awarded a Grammis and the songs Du måste finnas, Hemma, Vildgräs och Präriens Drottning was released as singles. In his review Tore Ljungberg wrote “Helen Sjöholm is a great talent and a find as Kristina. She has a great voice and a vast range, she is very believable in her interpretation. Her rendition of Du måste finnas, when Kristina at the end of the second act doubts the existence of God is a masterpiece, truly chilling. Min Astrakan is another gem.”

Two documentaries was made for TV, one about the trip to Minnesota in 1996 and Långt bort och längesen in 1997, a documentary about the rehearsals and work to put the production together.

On september 23 and 24 in 2009 a concert version of Kristina från Duvemåla was preformed at Carnegie Hall, New York. The lyrics had been translated into english and the production was now called Kristina. Helen, once again, played Kristina. She was the only Swedish singer to take part. The part of Karl-Oskar was played by Russell Watson and Kevin Odekirk portrayed Robert and Louise Pitre played Ulrika.

On april 14, 2010, another performance of Kristina, with the same cast, was given at Royal Albert Hall in London. The same month a recording of the performance from Carnegie Hall was released on CD. 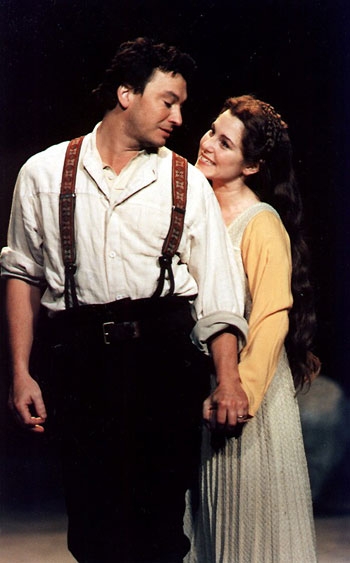