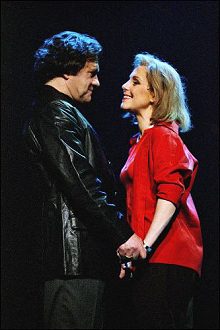 Chess premiered on February 23 2002 at Cirkus in Stockholm, the musical created by Benny Andersson, Björn Ulvaeus and Tim Rice was directed by Lars Rudolfsson. Helen played the part of Florence Vaszi, the fiance of the American chess player and also his second.

The other leading parts were played by:

What the critics said:

“Right when you think you’ve seen it all there is Tommy Körberg and Helen Sjöholm singing the wonderful duet ‘Du och jag’ as two acrobats are preforming a breathtaking act above them. Perfectly chosen leads; Tommy Körberg from old Chess and Anders Ekborg and Helen Sjöholm from Kristina från Duvemåla. Together they give the show weight and depth and Per Myrberg is very good as the Russian manager”.
Jens Peterson, Aftonbladet feb. 24 2002 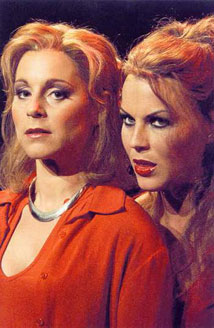 “Above all this is the soloists show, such charisma! Helen Sjöholm lets her magnificent voice flow without visible effort. Already in the first act she delivers a show stopper in lovely “Inte jag” (Someone else’s story) The applauds are never ending”.
Anders Björkman, Expressen

“More impressive still is how Helen Sjöholm completely excels in every number she is in, both in action and song. She has three or four ballads that makes the audience applaud so much that the cast has to wait for them to stop before they can continue. No matter who she sings with, or to, it is like clockwork. Duvemåla was a breakthrough but this part is ten times harder to carry and she manage without the least hesitation and show that she will be our leading lady for years to come”.
Lars Ericson, Sundsvalls Tidning feb. 25 2002

On October 28 2002 Björn & Benny and all the soloists except Tommy went to Åhléns department store in Stockholm to sign the CD-box that was released the same day. In 2003 Chess was released on DVD.

Helen was awarded Guldmasken in march 2003 for her role as Florence. The last performance of Chess was played on june 15 2003 and had then been seen by 495.940 theatergoers since opening night. There were plans for Chess to play at Malmö Music Theater in autumn 2004 but sadly the plans were put on ice due to the theaters bad financial situation. 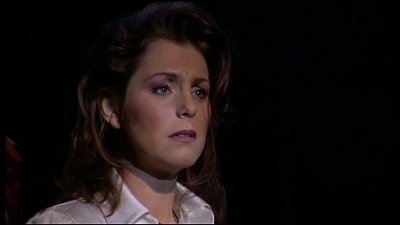