In the autumn of 2005 Helen starred in The Threepenny Opera by Bertold Brecht with the musical score by Kurt Weill. She played Polly Peachum when the play opened on september 10 at Stockholm City Theater. Mackie the Knife was played by Philip Zandén, The Beggar King Peachum was played by Dan Ekborg and Pia Johansson starred as Mrs Peachum. The production was directed by Lars Rudolfsson.

“What a strong vocal power and what a strong presence – with her singing she smooths of the sharp edges of the music and replaces it with the concentration of a welding flame. The production at Stockholm City Theater is carried by the music and the songs. The interpretation is intensified, burning hot through the power that Helen, Nunes and the company provides”
Lars Ring, SvD

“Talented acting with a certain variety style with several talented singers led by the voice of Helen Sjöholm which is extensive, clear and right on cue. Her rendition of Pirate Jenny says everything that needs to be said about the dream of final justice. Touchingly naive and childishly merciless. Rudolfsson does not hold back on the darkness but there is also room for laughter, dreams and the moonlight shining on all who love.”
Margareta Sörenson, Expressen

On october 21 2010 Stockholm City Theater celebrated 50 years with the premiere of the production Aniara, based on the futuristic novel written by Harry Martinsson. This production, also directed by Lars Rudolfsson, starred Helen as the blind poetess against Ingvar Hirdwall as Chifone, Dan Ekborg as the comedian Sandon and Claire Wikholm as Miman among others. The brand new music for the show was written by Andreas Kleerup. Helen received glowing reviews once again.

“Helen Sjöholm as the poetess makes the deepest impression in the songs of the second act, interpreted with force and wrath.”
Gun Zanton-Ericsson, Östgöta Correspondenten

“And there she is, finally, in the second act with a few unforgettable solos; the blind luminous poetess, Helen Sjöholm. With her melancholic, clear soprano she carries us into the great seriousness and infinity.”
Marita Jonsson, Gotlands Tidningar

“The brightest light is Helen Sjöholm as the singing poetess. Few can, like her, sing with such natural strength and authority and at the same time be completely open and vulnerable. She manages, through her singing, interpret, and enhance the glowing darkness in Martinson.”
Jon Sjögren, Uppsala Nya Tidning

“Helen Sjöholm gives a magnificent contribution. Her clear voice together with the dense, dark and beautiful lyrics is a captivating combination. The trio of Kleerup, Martinson and Sjöholm is the high point of the evening.”
Tita Nordlund-Hessler, Eskilstuna Kuriren

Hugh and Nancy’s many worlds

On March 2 – May 30, 2019, Helen and Vanna Rosenberg played the double role as housewife Nancy at Dramaten in Stockholm, in Lars Rudolfsson’s newly written play Hugh and Nancy’s many worlds, with music by Mats Gustafsson. Hugh was played by Magnus Roosmann, the daughter Liz of Emma Broomé and in the role of son Mark Helen’s son Ruben Granditsky alternated with Svante Billinger.

The reviews were a bit mixed, but Helen and Vanna Rosenberg were warmly praised:

“The performance is at its best in the scenes with Helen Sjöholm and Vanna Rosenberg as copies. Their family life has small significant differences, even though husband and children are the same”.
Jens Peterson, Aftonbladet

“However, the big asset is the meeting between the two strong universes that are made up of Helen Sjöholm and Vanna Rosenberg in the double role as Nancy. It sparkles about both acting and singing”.
Maina Arvas, Dagens Nyheter

“Hugh and Nancy’s many worlds demands a lot from the audience but if you take in the performance you get a lot in return both in terms of scenic lust and imagination. Not least when it comes to the superbly intertwined Vanna Rosenberg and Helen Sjöholm. It´s a performance that warms up in the late winter evening”.
Lena S. Karlsson, Opulence Magazine

On 29 February 2020, Next to Normal premiered on the main stage at Uppsala City Theater, where Helen played the role of mother Diana. Due to the spread of covid-19, only eight performances were played before the spring program was canceled. The last performance date was March 14.

“What fantastic voices and what a strong ensemble! That Helen Sjöholm is able to add a warm tone to her song, no matter what fragile and tormented role she has, has been known since she played the abused wife in the movie As in Heaven“.
Susanne Sigroth-Lambe, Uppsala Nya Tidning

“But the show’s emotional core is, of course, Helen Sjöholm’s Diana, portrayed with a kind of everyday exaltation in both voice and acting. Like Rolf Lydahl as her husband Dan, whose life disappointment and love-thirsty hopefulness can almost be touched.”
Johanna Paulsson, Dagens Nyheter 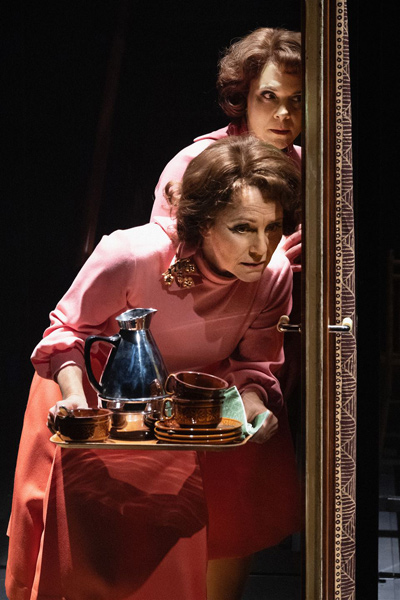