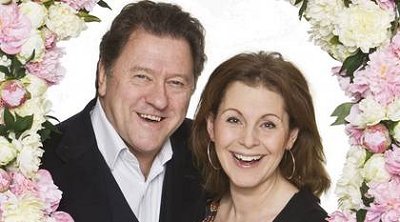 The Broadway hit My Fair Lady premiered on september 12, 2008, at Oscarsteatern in Stockholm with Helen as Eliza Doolittle. Together with her on stage were Tommy Körberg as Henry Higgins, Michael Segerström as Hugh Pickering, Jan Malmsjö as Alfred P Doolittle and Christopher Wollter as Freddy Eynsford-Hill. The production was directed by Tomas Alfredson. The show ran for little over a year, ending on december 19 2009. 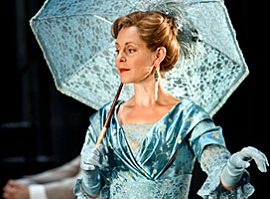 “World class. Helen Sjöholm is incredible as Elisa in a production of My Fair Lady that does nearly everything right. A wonderful musical evening with a lot of exclamation points…
How good is Helen Sjöholm? She possesses such intensity and presence that when Eliza finally gets her vowels in order in Den spanska räven rev en annan räv I was genuinely happy she pulled it off, that is how much Helen captivates her audience”.
Jens Peterson, Aftonbladet.

“What an Eliza, what an magnificent Eliza Helen Sjöholm is. The obvious star of the show, despite that the competition for the lime light is fierce. She sings with a golden voice, she has depth in the dramatic scenes and she surprises with her comedic moves both in timing and body language”.
Anders Björkman, Expressen

“Helen Sjöholm is magnificent in the mix of variety squiggling and majestically wronged. Her phenomenal straight key is the center around which the whole show turns”.
Bo Löfvendahl, SvD

Helen was awarded Guldmasken for her rendition of Eliza with the explanation “ Every melody is sung with persuasion and musicality, every syllable is heard. She creates a heartfelt portrait of one of the best known characters in musical theatre”. 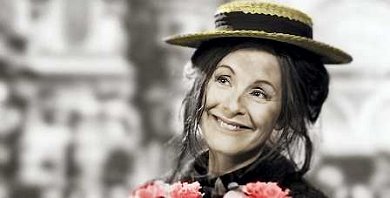