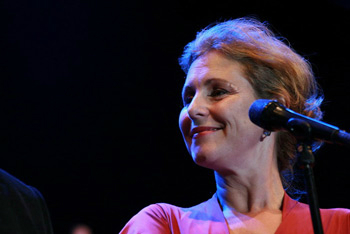 I had seen Tommy Körberg once, in the original production of Chess. Superb AND more than half a lifetime ago. I saw Helen Sjöhölm in the Royal Albert Hall performance of Kristina. Just superb. I had never seen Benny Andersson perform live. You only live once. Life is for living. You regret much more the things you don’t do, than the things you do. There were so many reasons for making this Odyssey. It was time to go for it.

Arrived in Uppsala just before 6pm and walked to my hotel. Quick check-in. Quick turn-around. Follow the crowd. A nice change to feel I am one of the youngest people at a concert. Efficient entry procedure. Friendly too, as everyone seems to be. Into the square. Stage is there, ready. It’s true. I am here and so are the BAO and so are their wonderful singers. Excitement, excitement, excitement. Pulse races. Catch breath. The crowd almost fills the place already but everyone seems happy and good-natured. Buy a signed poster for the event, reduced to 80kr because it was (very) slightly damaged. Special treasure to take home. It is 1840 hours. Time for beer. It must be drunk only in the refreshments tent?!? Oh, why did I buy two with the concert due to start in 20 minutes?!? Years of practice pay off. A litre of beer, twelve minutes. Successful. Not pleasant, but successful. Then, outside, just in time, into a crowd full of anticipation. That “dancing square”, marked out by coloured lights. Everyone so happy, the square so orderly and tidy despite the crowd. Fold-up chairs and picnic bags. Find a standing place near the front, at the side. Then, a minute or two after 1900 hours, as advertised, the man himself, Benny Andersson, followed by his band. Oh my.

What followed is almost impossible to describe. Over a dozen people on the stage and some seven thousand people watching it, yet this had such intimacy from start to finish, as well as consummate showmanship. This was music from friends, for friends, amongst friends. Behind me the dancers waltzed away, no doubt every bit as giddy as I was with the exuberance of it all. Had I not loved them so much, I might have envied them. This was not a night for envy. We were the fortunate ones. All of us. The musicians were outstanding, but for me nothing matches the human voice and I must be honest: All the time I was waiting for the singers – in particular Helen Sjöhölm – to come on. I wanted to see, in these surroundings so different from the Royal Albert Hall, whether she really was as good as I believed her to be. I was not disappointed. I cannot believe there are finer performers on the planet.

The joy of the audience cannot be captured in words. My own joy cannot be captured in words. Sometimes music makes me think dark thoughts, sometimes it brings back sad memories, sometimes it inspires melancholy that cannot be defined, whose deeper origins remain unknown and unknowable. In Uppsala, this music, Benny’s music, filled me with the simple, overwhelming joy of being alive, perhaps more than I had ever known before.

Technically, Helen and Tommy are impossible to fault. They were in astonishingly good voice and they enjoyed being in such good voice, but this was not merely a matter of technique. We all adored them. Their joy and their humour and their vitality were infectious. They were not to be resisted. Those four hours somehow both lasted an eternity and flashed by in the blink of an eye. Highlights? In any other context, any song or tune would have been a highlight, but this concert did seem to get better and better as it went on and the final series of songs, including three old friends from ABBA days – Hasta Manana, I Do, I Do I Do and Why Did it Have to be Me? – will stay in the memory forever. As I leave, idly I wonder if this event was filmed. I am already eager to experience it again. I also muse about when the next BAO event might be. I hardly care when it is, or where it is, because somehow I believe I shall find a way to be there. This time, with friends. They will have no choice in the matter.

Of course, it is one of the joys of music – perhaps its most powerful quality – that it crosses boundaries. I still feel there is a danger in the concept of “World Music”, however, as there is a danger in travel itself, of music and cultures becoming homogenised, losing their distinctiveness. What I realised that night in Uppsala was that I was an outsider – an outsider who had invited himself into a quintessentially Swedish occasion – but in the best, most inclusive definition of the word, if that makes sense.

Of course, there were outside influences at play on-stage, notably from Scotland and elsewhere in Northern Europe, but they had good historical justifications and the music, the spoken introductions, even the jokes (were they funny?) – everything but everything was so Swedish and in Swedish too. I could not have been anywhere but where I was, and I loved that so much, more than I can describe. The journey had been worthwhile. It was as though I had invited myself to a party of strangers, all of whom treated me kindly and warmly, but sensibly carried on doing things their way. What a privilege.

One very friendly group of locals chatted with me and were astonished that I had come so far to hear this concert which, for them, was a local event, not “run of the mill”, but part of the fabric of everyday life. They were surprised I had even heard about it. For me, being there was the most natural decision in the world and one of the best decisions I have ever taken. I have never been surrounded by such a sea of gentle, kind, considerate, carefree happiness and joy. Thank you, Benny, and Helen, and Tommy, and all the band. Thank you, Uppsala – and thank you Sweden. In a way I have had my first little experience of Heaven.