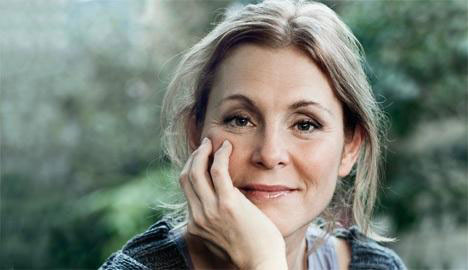 Kattis meets…
As a young Helen Sjöholm loved to sing to herself in her father’s sheets workshop – sad and beautiful broadside ballads. Today she attracts a large audience and sells a lot of records. But who is she?

One can only imagine how tired she is being called “Benny Andersson’s muse” – but Helen Sjöholm, 40, repeatedly returned to the man who once hand-picked her to be a star in newly written musical “Kristina from Duvemala”. Not least as chorus singer in BAO, Benny Andersson’s Orchestra, where she had a megahit with “You are my man”. But when she recently released her first album in eight years, it was entirely without the involvement of “the beards,” as she jokingly calls Bjorn and Benny. When I meet Helen at the record label’s offices in Stockholm, she comes direct from a photo session – just one of all the things she has to do in connection with the release. Still, she looks surprisingly calm, relaxed and smooth. Purely happy.

How are you feeling right now, Helen?
– I’m excited for my new album with Billy Joel-covers, which is released these days. It was eight years since I released an album so I’m not that accustomed recording artist precisely, but have longed for it. I have a good time of life right now.

How would you describe the album?
– I want people to listen to it a few times. It´s not a direct album. It requires a few listenings. I want you to like it and enjoy some beautiful songs from yesterday have come back to life.

In what ways are you like Billy Joel?
– Not in any way at all I think, except that we both love New York.

What is so special about New York?
– I feel so free there, even though I don´t really like big cities. But I loved the city from the first moment. The people and the atmosphere – all at once.

Do you think you would become a different person if you lived there?
– Yes, absolutely! Everything is allowed there and you can be who you are, without to adapt oneself. But of course you feel more free and more open minded when you are on vacation…

Now, you are going to calm down for a year. How does it feel?
– It is double. I was on maternity leave with Ruben during his first year, but then I took the opportunity to renovate a bit. I find it hard to be vacant for a long time. It is inherited in our family, I think. It is based in some kind of strong need for creativity. It´s a small sense of duty in it too, of course.

What were you like as a kid?
– I have many pictures and memories of myself as a child, inside. Many concrete images as well, and they help me to remember. We are three siblings, and as adults each of us got ten albums with small stories written by the mother, which of course is pretty amazing! I was one of those who always sang, talked and read. I was also in need of being alone a lot – I have always been. But otherwise I sang all the time – often sad songs as I lay in bed singing loud, loud! I spent a lot of time with my grandmother as a child. She was almost as old as I am now when she became a grandmother. Her mom and dad were in the long-term care and I often visited them there and sang for them. I felt at home there. Otherwise, I grew up in a playful family.

What does it mean to have a good childhood, do you think?
– That you feel loved, as I always did. And to make things together. We did a lot together in our family: went into the woods, swimming in public baths. My mother was a teacher and good with children and I had, and still have, a very childlike father who loves to play, which of course is quite unusual. We had fun together and it could take time, which is something I feel I can not really live up to when it comes to my own son. And my parents love each other and it’s been very reassuring.

Was there something that was not so good?
– Yes, we had quite a lot of Jante at home and we have not been good to praise each other. And we have to know that nothing comes for free. My mother was no one who stood in the dock to meet us or to organize a party. We had to help and see that nothing is done by itself. But I have taken advantage of that. When I was older, I had difficulty entering into different groups of friends. I was pretty strong willed and I think many people recoil from it. But I’ve always had a need to have my own bubble to be in. But when I eventually got into a choir, it felt like I came home, both for the community that existed there and because I loved to sing.

How much has the partly self-imposed exclusion followed you into adulthood?
– I often feel too tired to be social, I can not take in more. I find it easy to capture people’s energies, it is useful in my job, but it ge…ts incredibly tiring sometimes.

It feels like you have great integrity – how does that work in a partner relationship?
– You try to meet a man who is like yourself, so did I. But as time goes on, the better we are to be two and the need to be alone is not as big any longer. I had a long relationship before in many years which were marked by that I traveled and worked a lot, so it’s only now that I’ve come close to someone in a more everyday basis. Many people react negatively to my need for solitude and feel foreclosed. But David doesn´t, luckily.

Your last man was 17 years older than and you, and you have worked extensively with older men. Why is it so?
– I really don´t know. It’s not like I’ve been looking for an older man to replace any absent father. For some reason I enjoy being among men and it has happened that many were older than me. Over time I have been damn good on male jargon. But on the other hand, I have been bad for daring to be female with the guys.

What have you learned from it, do you think?
– I’ve probably got a certain amount of confidence and think it´s quite easy to get along with men. However, I have probably missed some invitations because I so easily make friends with men.

What happened when you met your current husband David?
– It just clicked in fact, quite clearly clicked. He was a lot of things I never thought I would fall for – a city man and uninterested in sports. All the images I had of how I thought my husband would be razed, and it was so nice. It has changed my self-image. I can live with a man who is so unlike me, and perhaps that´s why he is so good for me.

You have a separation behind you, after a long relationship. What have you learned from it?
– In addition to that it takes time to heal wounds, I have understood the need to sometimes be able to endure. It can not be good all the time, and there is no reason to panic. One must be able to leave each other alone, too. And then I think you should talk a lot to each other. And to have physical contact.

Do you believe in the life-long love?
– I see it in my parents so yes, I believe in it. You can not promise anything, but of course that is the way I want it.

How self-reflective are you?
– Pretty much, but it disappears quickly too. I’m thinking a lot about what impression I give, but when I´m working and stand on a stage these thoughts disappears. I’m so free when I work and that’s probably why I love my job so much.

Do you have total presence when you sing?
– Yes, I´m very easily captured in a feeling. I have the internal pictures of some songs and I get easily in a certain mood.

What do you think about life?
– I can marvel at all I get involved in. And when Reuben arrived, I was so happy to be a part of that experience too. He will always be important, but my job also means a lot to me still.

But can you see an obvious purpose in life?
– No, I think that everyone must find their own meaning. I try to involve myself in things that I think are important, but I have to turn off as well and not take in all that happens around me. It is a great sense to be involved in Rubens’s life and I consider it a duty to feel good yourself to be a good mother to him.

When I listen to your song, I start for some reason, often to cry. You have such a special fervor in your voice. Can you feel it yourself?
– Yes, I can. I feel much when I sing. Things come to me. It’s like I don´t create it myself but it´s just there. I’m working hard to find some stuff but when it’s time and I do not think I’ll fix it something happens when I go out on stage. Something just comes to me.

It sounds almost like a religious experience!
– You have to just accept it and be fully open. And you have to concentrate.

Are you religious?
– No, I have been searching but am not religious. For me, nature is important. There I can experience myself as a small part of something big, which I think is a spiritual feeling. But I can not think of a single all-powerful force controlling everything. I believe the path to meaning is about being open to other people or a situation or a feeling.

Can you give any hint about how to be that open and receptive?
– I have had the good fortune to find my tools in my voice. But it’s probably ultimately about being seen. And let long sequences of time just go without getting stressed in life. I think you have to put yourself in a sort of peaceful state and that it isn´t doesn´t need to happen things all the time. Then I think we can get closer to an open mind.

Now I have to ask you about something completely different – how it feels to be called back by Bjorn and Benny?
– Little bit unreal I’ll admit. It began with Benny showed interest in me after a song performance that he was listening to. Then they called me and wanted me to audition for “Kristina from Duvemala”.

Do you remember how it was when you got the role?
– Yes, I will never forget! Director Lars Rudolfsson called two days before Christmas, from a phone box in Malmo, and asked if I wanted to play the lead role. It was actually quite surreal. I had just started cultural studies at the university which I stopped immediately. I just screamed. For quite some time too! It was a big deal in my life, my absolute breakthrough, and I learned an awful lot in the five years I was doing it.

What are you doing in ten years?
– I hope to continue with this. That’s definitely what I want to do.